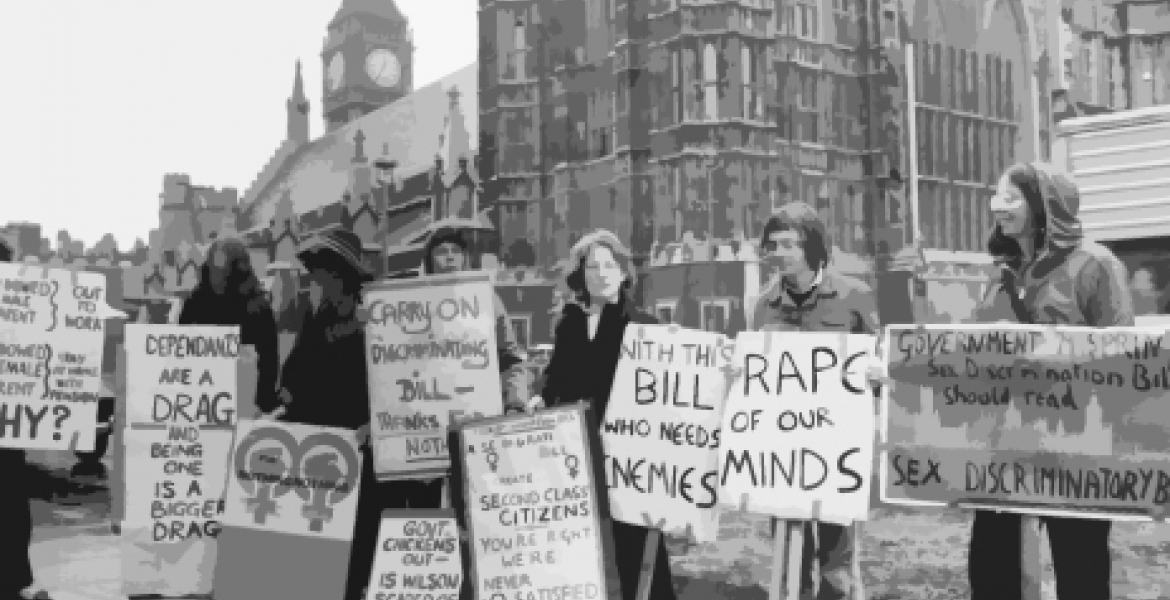 In the wake of the terrible abduction and murder of Sarah Everard, and the public protests against official responses to the crime, Suzanne Moore asks ‘How we can turn a moment into a movement for women’; she says: ‘It’s 2021. It’s time to reclaim the streets, reclaim our rage, reclaim our history and make some more. I don’t care what this wave gets called. It’s time for a tsunami.’ https://www.telegraph.co.uk/women/life/can-turn-moment-movement-women/

And yet in trying to hijack a horrible crime for feminism, Ms Moore is too late: according to reports from serving police officers – including female ones – this nascent protest has already been hijacked, with the vigil held  at Clapham Common for Ms Everard ‘infiltrated by members of XR and Antifa’; apparently, after the bulk of those attending the vigil departed, protestors ‘spat at, punched and abused officers’ merely for doing their duty. https://www.telegraph.co.uk/news/2021/03/15/rank-file-officers-claim-sarah-everard-vigil-infiltrated-members/

Elsewhere, former Labour Home Secretary David Blunkett says it is unfair to blame the police who are criticised if they show restraint, and criticised for being too heavy-handed if they apply the law. He says ‘some people’ are ‘seeking to divide us rather than unite by pouring scorn on the behaviour of men in general’, and that ‘[s]omewhere lost in this are her family and close friends, grieving for a loved one’ (‘The police must have clear priorities’, Telegraph, March 16, 2021). https://www.telegraph.co.uk/news/2021/03/15/police-must-have-clear-priorities/

Ms Moore also seeks to change history by including the legalisation of abortion in a list of historic feminist achievements, saying, in a ‘trot through history’ that before the ‘first Reclaim the Streets March’ in 1977 in Edinburgh, a ‘lot went on in the 1970s and before, organised by those feminists that many of the young now love to scorn. The contraceptive pill had revolutionised women’s lives in 1962. In 1964 The Married Women’s Property Act was revised so that women were allowed to keep the money they earned. Abortion was legalised three years later. The following year in Dagenham, 850 women machinists went on strike on the grounds that their work was not “unskilled”.’ She insists that this list ‘is not a rebuke, it is rather a reminder of what can be done when you harness political will to the concerns of ordinary women.’ https://www.telegraph.co.uk/women/life/can-turn-moment-movement-women/

However, her article is illustrated with a photograph of a handful of women protestors outside Parliament, captioned ‘Women representing the Women’s Liberation Movement protesting against the Government’s Sex Discrimination Bill in 1975’. In fact, she would have to look long and hard for photographs illustrating her insinuation that the 1967 Abortion Act was a product of feminism, for the simple reason that there are none. The abortion campaign, although it received a boost from left-wing infiltration in the 1960s, was a long-standing project of the eugenics population control movement concerned about the ‘thoughtless’ reproductive habits of the ‘unfit mother’, and the campaign was sustained over decades of complete lack of public interest by a handful of well-to-do humanists. https://www.amazon.co.uk/Their-Fruits-Eugenics-Population-Abortion/dp/0813215307/ref=sr_1_1?dchild=1&keywords=ann+farmer+by+their+fruits&qid=1604318850&s=books&sr=1-1

Legalising abortion was nothing to do with feminism (and neither was the development of the contraceptive pill, another outcome of the population control movement in the shape of racist eugenicist and very rich Margaret Sanger) but legalisation proved to be a truly misogynistic act, an essential ingredient of the sexual revolution that devalued women and provoked a later feminist backlash. It is ironic to regard abortion as some kind of triumph for women when so many women are being hurt by this ‘essential health measure’. https://www.liveaction.org/news/ten-year-study-abortion-maternal-mortality/?_hsmi=115973312&_hsenc=p2ANqtz-9ycN8GfT4olpmWFmk41U7khTumBhdxLofj2vGBsLSa2XWshqk0bjDiiP2RJT6BbKbS-6tJ1MljP440veUe7O-xWRUG7w

At 61, Ms Moore is fortunate in having been born before abortion was legalised, and if she really wanted to do something to help other women, she might turned her undoubted talents to calling for more support for pregnant women at risk of being coerced into taking abortion pills, as many GPs now fear. https://spuc.org.uk/News/ID/384791/86-of-British-GPs-concerned-about-DIY-home-abortion-new-poll-finds/utm_campaign/db2b8df006-news190520_COPY_01/utm_medium/email/utm_term/0_826f492851-db2b8df006-148123137/mc_cid/db2b8df006/mc_eid/c2228029a3?utm_source=SPUC+News+List

Instead, she is trying to hijack female discontent about violence against women for her brand of anti-all-men feminism; but how does it help to keep women safe by making the police, and indeed all men, the problem? Abortion is an act of violence against women, and while it is championed as essential for female equality, we will never eradicate violence against females. Her brand of feminism also enforces violence against the unborn, both female and male, while leaving really violent men untouched; indeed, she will probably earn their undying gratitude for making it much harder to catch them.