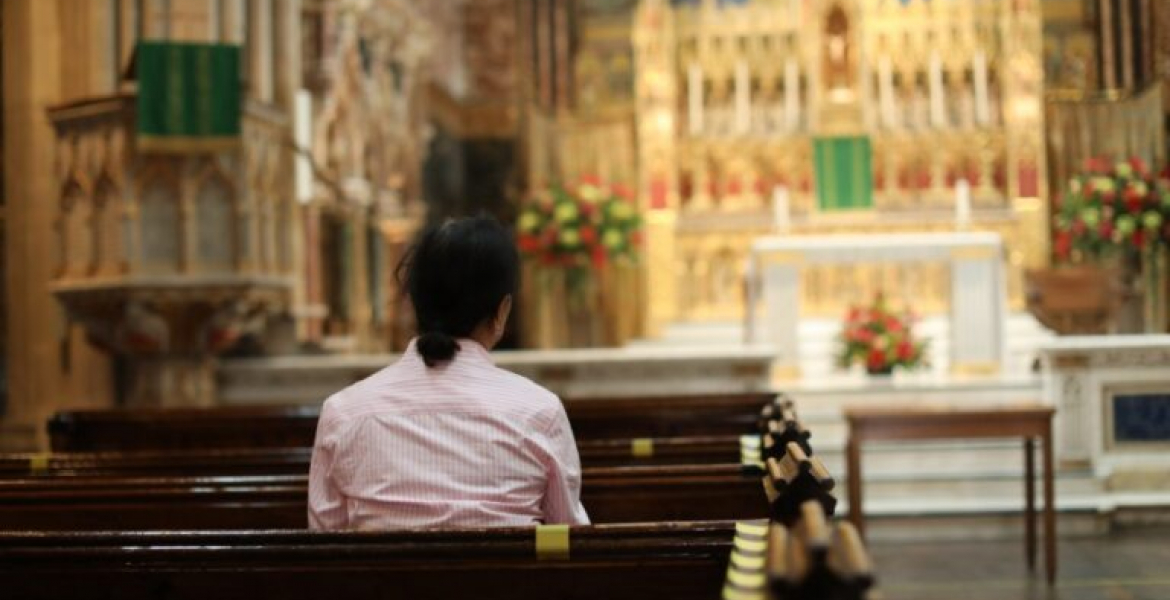 ‘Ears to the Ground’ or ‘Heads in the Clouds’?

Abstract: In a post Covid-19 world will the Catholic Church in the UK ever recover,  Anthony Hofler laments on the inability of our leaders to understand the problem and therefore act in any decisive or rational way to re-evangelise the lay.

On 22nd April 2021, the Bishops’ Conference of England and Wales issued “The Day of the Lord.” The two-sides-of-A4 essay paid tribute to people who have responded charitably to the difficulties caused by the public health emergency which began in Spring 2020. Then it mentioned challenges connected with the future. The final section of the essay focused on exhortation “to restore to its rightful centrality in our lives the Sunday Mass,” “and, pre-eminently, the Eucharist.” As well as displaying the long-established policy of avoiding anything which could be foreseen to cause unpopularity or disagreement, the essay sometimes presented as facts circumstances which seem so untypical of reality as to be delusions:

“Churches up and down the country have realised” (presumed to have been intended to be interpreted as ‘put into practice,’ rather than as merely ‘recognised’ or ‘understood’) “the vision of Pope Francis that they be...“centres of constant missionary outreach.” ” It would be strange if the ‘deadness’ which has seemed so widespread for so long had been suddenly replaced by energy. In your parish are there significant signs of such a transformation? Do the weekly notices-sheets show that many parishioners are now bursting with apostolic activity instead of languishing in apostolic apathy?

“We thank all who have developed diverse new patterns of outreach – of prayer, catechesis [and] study.”  Although the intended interpretation is unclear, probably it was that prayer, catechesis, and study are new forms of outreach; rather than that in themselves they are not new but have been given “diverse new patterns.”  Certainly there is nothing new about prayer, and how can the concrete concept of ‘outreach’ take the form of intrinsically-intangible prayer? There is nothing new about teaching the faith, but perhaps diverse patterns of it are new; what should be new about it is the replacement of minimalism by substance, but substance can expose disagreement and therefore is usually avoided. As for “study,” studiousness is not visibly a hallmark of Catholics; do most of those known to you show signs of studiousness, such as by trying to initiate discussion of doctrinal topics? Aren’t such discussions so rare that the raising of doctrinal topics would result in blank faces and no real ‘engagement’?

“ ‘Vibrant’ is a word which seems to have characterised so many of our parishes throughout the pandemic.” Has your parish been vibrant, or has it been just as dead from one week-end to the next as it has been for a long time? Can vibrancy be imagined rationally to result from a situation in which meeting indoors has been restricted severely and ‘social distancing’ has been the rule outside?

“What is clear is the challenge we face of bringing our communities and the practice of the faith to a still greater expression and strength.” “A still greater expression and strength” implies that a great expression and strength exist already. Comments such as those quoted above suggest that the bishops are harbouring this delusion. Things were ‘crumbling’ before the pandemic arrived – as was acknowledged by Popes, but not by our always-put-a-positive-gloss-on-adversity hierarchy. The bishops’ bizarre belief that we are in a strong position evokes memory of what Michael Davies wrote about a document entitled “The Church 2000,” published decades ago by the Catholic Information Office. In his analysis of it, he referred to its prediction that if its “pastoral strategy” for revitalisation of the Church’s mission were implemented, “even greater days” would lie ahead. “Greater days than what?”, he asked. “The first requirement for a successful strategy in any sphere is that it should be based on a realistic appraisal of the existing situation and resources. In speaking of “greater times” ahead the Authors clearly believe that great times are already here; and this alone shows that they are living in a world so divorced from reality that their report is likely to be valueless. They take great pains to show that this is the case and in this respect alone their efforts are entirely convincing” (“Christian Order,” April 1974).

“We are aware [that] there are the fearful and weary” (Bishop Patrick O’Donoghue of Lancaster wrote in “Fit for Mission? Church” [Catholic Truth Society, 2008], “Why does our Church feel so tired and worn out?” [p.10]; and “I have sometimes noticed weariness, even hopelessness, among some clergy and laity, when asked to engage with the challenges that face us as the Church..” [p.13]. Later he said that “Fit for Mission?” “hit a wall of silence among the bishops in this country” – “Catholic Herald,” 3rd July 2009, p.3), “those who have simply lost the habit of coming to church” (most Catholics lost that habit long ago, as Mass-attendances have proved, so pandemic-attributable absences will be from among the small percentage who had maintained comparatively-regular attendance). “Personal contact, clear reassurance, and sensitive invitations will all be needed” (we can but hope that they will be more successful than any which occurred before the pandemic).

“There are those who will have reassessed their pattern of life and priorities. The practice of faith within the community of the Catholic Church may not be among those priorities. A gap may have opened up, or widened,” (a hint of recognition of reality) “between the spiritual dimension of their lives” (such as it is; Pope Francis said, in his Angelus discourse on 8th July 2018, that many baptized Catholics “live as if Christ does not exist: they repeat the signs and acts of faith, but they do not correspond to a real adhesion to the person of Jesus and his Gospel”) “and any communal expression of that spiritual quest. They represent a particular focus and concern for our outreach” (seemingly-typical parishes have no organised programme for attempts to rescue the lapsed; “evangelisation”? what’s that?).

“We believe our schools can be bridges back to church.” Experience does not support that belief. Few parents and children attend church except for ‘special occasions’ such as First Holy Communion and Confirmation, and perhaps one or two ancillary ones such as collective ‘Acts of Commitment’ during Mass in church at the beginning of preparation-programmes. Such co-operation is useful to render the children eligible for admittance to a Catholic school, but once that objective has been achieved the parents evidently have no desire and recognise no advantage in religious practice. The schools alone cannot instil religious commitment (it has to be a partnership between schools and parents), and recurrent stories of false teaching suggest that ‘Catholic’ is no more reliable a description of a school than it is of an individual. The root problem is the ‘spirit of the age’ which saturates society and has infected the Church at all levels.

The bishops went on to stress the need to make the Eucharist “the foundation stone of our lives.” They were right to do so. No doubt they are pleased that nearly everybody who goes to Mass goes also to Holy Communion. Hardly anybody goes to Confession. The bishops’ essay did not mention that. Perhaps they are not worried about it. They should be. Perhaps (‘looking on the bright side’) they believe that the ‘disconnection’ between Confession and Holy Communion shows that very few people now commit mortal sin, or even venial sin, and that to ‘go on’ about it might ‘put people off’ and therefore diminish rather than encourage recourse to the Eucharist. Confused thinking on such matters needs to be corrected. That should be added to the challenges which the essay identified. The size of the counter-cultural task is enormous. It must be attempted, but the long-cultivated sedation is so deep that exhortation to activity seems hollow. ‘Up-beat’ messages which imply the existence of ‘buzzing’ parishes contrast with those in which the ‘z’s are more symbolic of sleep than of energy.