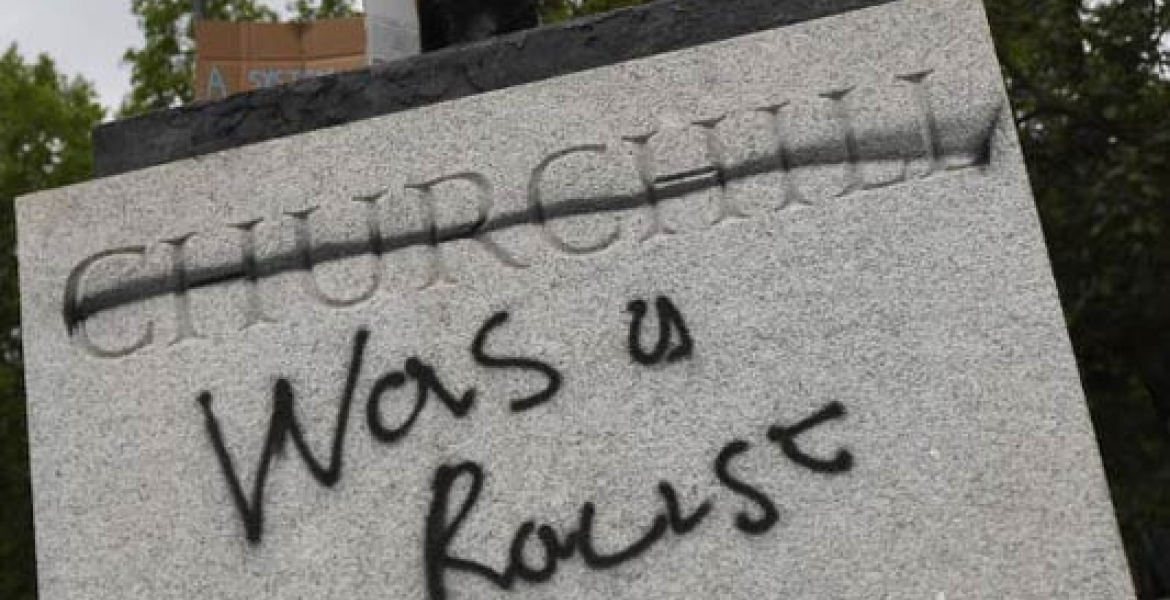 Following the toppling of statues of those accused of racism and colonialism, and the continuing campaign to highlight the role of such individuals in acts of historical injustice,  Culture Secretary Oliver Dowden ‘has summoned 25 of the UK’s biggest heritage bodies and charities to a summit next week where they will be told “to defend our culture and history from the noisy minority of activists constantly trying to do Britain down”’ (‘Universities face fines as part of twin assault on “cancel culture”’, Sunday Telegraph, February 14, 2021). https://www.telegraph.co.uk/politics/2021/02/13/exclusive-universities-face-fines-part-twin-assault-cancel-culture/

Sir Winston Churchill’s statue was among those attacked - daubed with slogans accusing him of racism - and this new Government initiative comes after a panel of academics at Churchill college Cambridge branded the war-time leader a ‘“white supremacist”’, claiming that British colonialism had a worse record than Hitler’s Third Reich. https://www.telegraph.co.uk/news/2021/02/11/churchill-white-supremacist-leading-empire-worse-nazis-claims/

One gets the impression that like those who dug up the corpse of Oliver Cromwell in order to take posthumous revenge, the historical revisionists are keen to unearth evidence of past crimes and dance on the graves of alleged offenders against the present pieties of wokeness; however, as the International Churchill Society has pointed out regarding the claim that Churchill ‘embodied white supremacy’, history ‘does not support this gross and offensive allegation’, and that ‘ironically, it is only due to the courage and essential leadership that Churchill provided during Britain's darkest hours that allow these individuals the freedom to discuss his legacy in this manner, no matter how ill-informed.’ www.winstonchurchill.org

In another more delicious irony Professor Corinne Fowler from the University of Leicester, the academic who has been the guiding force ‘behind controversial studies linking National Trust properties and Britain’s Empire’, has now ‘admitted that her ancestors were slave owners’ in Haiti, and ‘“were pretty nasty about it”’; however, on the Chopper’s Politics podcast she maintained that far from being “‘divisive”’, this ‘“is a shared history”’, and while her own ancestors owned slaves, ‘“there are the descendants of people who were enslaved in this country. So we can come together around these histories to really have a fuller, more global understanding of the past”’; she insisted that ‘“it’s just really important not to weaponise this subject, but to talk about it sensibly”’ – sentiments somewhat undermined by entitling her recent book about England Green Unpleasant Land (‘National Trust expert has slave owner links’, Sunday Telegraph, February 14, 2021). https://www.telegraph.co.uk/politics/2021/02/14/national-trust-academic-leading-review-stately-homes-admits/amp/

The influence of such historical revisionism is such that the brewing giant Greene King is to rename some of its ‘offensive’ pubs, including The Black’s Head in Derbyshire and three named The Black Boy - despite disagreements about their actual meanings - changing the names to The West Gate, The Lady Elizabeth, The Shinfield Arms and The Quarryman (‘Brewery’s Black Boy pubs renamed over slavery links’, Sunday Telegraph, February 14, 2021).

Clearly they are aiming for harmony, but how removing references to blackness – especially in a positive context - harmonises with activists’ claims that black experience has been airbrushed out of our social history – in what they themselves might term a ‘whitewashing’ exercise - is not so clear.

This is not to say that terrible crimes were not committed in the building of empires, which must be studied and debated; however, if we leave out those who fought against the injustices and the movements they inspired, as well as the times in which they lived and the battles they had to fight, like the historical revisionists we will be guilty of what G. K. Chesterton called a heresy – taking one small part of the truth and stretching it to cover everything else.

It is said that generals are always fighting the last war, but in the war for truth we are in danger of mistaking one facet of history for historical truth - worse, of throwing history into the dustbin of history. Our culture depends on this fight for our past, which is actually a fight for the future, in which battles as yet undreamed of loom on the horizon.

Thanks to Churchill, we no are no longer fighting the war he fought - and won - and we may be told by those who wish to change history that a changing view of history is simply inevitable – that we are like generals fighting the last battle; but if we lose this war for our past, it may be the last battle that we get to fight, since we will have lost the battle for the future.